In Cévennes, each day was dedicated to the wisdom of each Rhythm*. Participants explored, dancing from the roots of the soul. Dancing began as early as 8h00 and continued through to18 and 22h.

Drawing from indigenous and world traditions, in the late 1970s Gabrielle Roth devised a practice in movement meditation 5Rhythms, using ecstatic, mystical, shamanic and Eastern philosophies. Transpersonal psychology and Gestalt therapy also intertwine as fundamentals of energy moving in waves, rhythms and patterns. She spoke of 5 Rhythms a journey of the soul. Moving the body, freeing the mind and releasing the heart we connect to inspiration and unlimited potentials. 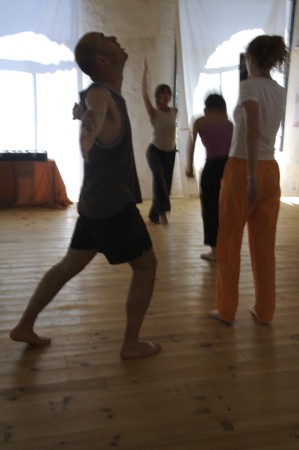